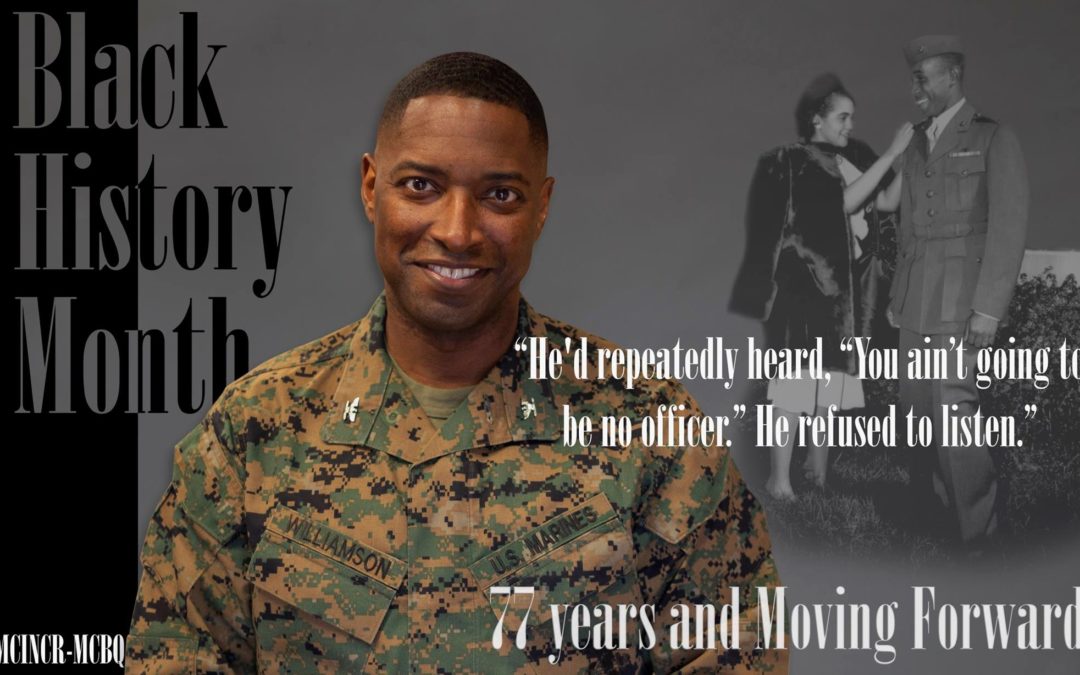 Am I Good Enough To Lead These Marines?

He was born into a family with a proud Naval history, leading him to aspire to attend the U.S. Naval Academy (USNA) from his earliest memories. Living in Maryland with a Navy family and attending academy events, made it easy to see himself at that school and serving in the Navy.

Williamson’s grandfather, also his absolute living hero, joined the Navy in 1951 at a time when opportunities for the African American community were uncommon. The Navy provided his grandfather with career opportunities as well as a chance to see the world. He served for 27 years, retiring as a master chief petty officer.

There was another influencer for military service in Williamson’s family. His uncle served in the Navy for 32 years, retiring as an admiral.

“From seaman to admiral, I gained lots of exposure to the Navy,” said Williamson.

Williamson entered the Naval Academy in 1990. He admits that he did not know the Marine Corps was part of the Navy or that serving in the Corps would be an option for him until he was attending USNA.

It was during his third year, while training with outstanding young Marine Corps non-commissioned officers at Camp Lejeune, when he asked himself, “Am I good enough to lead these Marines? Do I have the abilities to lead that kind of Marine in a challenging and austere environment?”

Williamson decided to compete for an appointment to become a Marine and was accepted. After graduating USNA, he attended The Basic School at Quantico, Virginia, and was selected to be a communication and information systems officer, a good fit as he had a computer science degree.

He is very proud to be part of the Navy-Marine Corps Team – continuing the proud tradition of his grandfather and uncle, while establishing a new tradition in the Marine Corps, which is being followed by his 19 year-old son, a Marine lance corporal.

Williamson enjoys watching his son learn and grow into a responsible young man and a great young Marine. He believes that his son was drawn to the Marine Corps after watching decades of military service by family members and being exposed to the professionalism of the Marines – an institution that pushes and challenges people.

Now, as the commander at OCS, Williamson’s in the role of identifying men and women of character and critical thinkers – folks that will lead our Marines for future generations.

* Pictured in the background – Frederick C. Branch became the first Black Marine Corps Officer in 1945. He was attending Temple University when he received a draft notice from the Army. After reporting in May 1943, he was chosen to be a Marine. He completed training in Montford Point, North Carolina.

After applying for OCS in 1944 and being turned down due to his color, Branch continued to pursue his dream of leading Marines. It wasn’t easy. In a 1995 interview with Philadelphia Inquirer Magazine, Branch said he’d repeatedly heard, “You ain’t going to be no officer.” He refused to listen.

While serving in the Pacific, his conduct earned him the recommendation of his commanding officer to attend Officer Candidates School.

He was then sent to Purdue University in West Lafayette, Indiana, to receive his officer’s training in the Navy’s V-12 program, the only African-American candidate in a class of 250.

At Purdue, Branch made the dean’s list and was commissioned a second lieutenant on the Corps’ 170th birthday, Nov. 10, 1945. As World War II had already concluded, 2nd Lt. Branch went into the Marine Corps Reserve.

During the Korean War, Branch was re-activated, promoted to captain, commanding an antiaircraft training platoon at Camp Pendleton, California. Upon finding his career opportunities limited, he resigned from the Marine Corps in 1955.

Branch established the science department at Murrell Dobbins High School in Philadelphia utilizing the Physics degree he earned from Temple University in 1947 during his reserve service. He taught for over three decades until he retired in 1988.

In 2006, the Marine Corps Recruiting Command created the Frederick C. Branch Leadership Scholarship. It is a Naval Reserve Officers Training Corps (NROTC) scholarship for students who are currently attending or have received letters of acceptance to one of 17 historically black colleges and universities that have NROTC programs. Graduates are commissioned as second lieutenants in the Marine Corps.

Happy February! Your NNOA Board has been busy since we left the conference and making a positive impact on the Sea Services. Here is a quick update.

We continue to make progress in all four lines of effort and seek your input on how to accelerate our progress:

CNO John Richardson, USN and I signed an updated Memorandum of Understand (MOU) last week and we are well on our way to requesting funding to support our 2019 Symposium. We anticipate having a NAVADMIN released early to give you enough time to make plans to attend August 7-8, Admiral Kidd Conference Center, Naval Amphibious Base, San Diego. This year our STEM program will be held August 6th, one day before the official opening of the Symposium. Please check our website for continuous Symposium updates. Sign up for alerts now to receive updates as they are posted.

The new Navy MOU, and the MOU signed by Commandant Karl Schultz, USCG are both available on our website for reading and downloading. We have high hopes to get a fresh MOU signed with the Commandant of the Marine Corps as well.

I held a “Town Hall” meeting for all NNOA members and appreciate your participation. Many asked that we continue to do this, especially for our At Large Members. The next one is planned for Saturday, 11 May.

Our Symposium Planning Committee lead by Western Region Vice President, Captain(S) Rod Rojas, USCG is hard at work. Thank you to all the members who participated in the Theme contest.  The final Theme was developed by our Theme Selection Committee (CDRs David Cooper, Shirl Johnson and Col Dorian Lewis). The NNOA 2019 Symposium theme is “Charting a Course for Tomorrow’s Leaders.”

Finally, we will launch a new Career Development Program in April. Please plan to join us for webinars where we will have guest speakers on career development topics using our newly procured webinar software. We want to offer sessions on a variety of career development topics but need your advice. Please click here and complete a short survey. The survey will close at midnight 28 February.

MILLINGTON, Tenn. (NNS) — The 2019 Officer Women Leadership Symposium (OWLS) hosted by Academy Women is scheduled to be conducted at the Arlington Women’s Memorial in Arlington, Virginia on April 24-25, 2019.  View Details 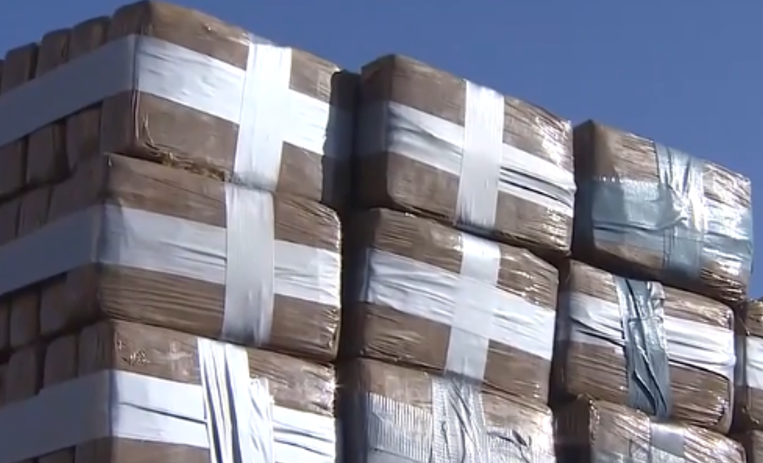 MIAMI — The crew of the Coast Guard Cutter Forward (WMEC-911) offloaded approximately 34,780 pounds of cocaine Feb. 5 in Port Everglades worth an estimated $466 million wholesale seized in international waters in the Eastern Pacific Ocean, the Coast Guard 7th District said in a release of the same date.  READ FULL STORY…

Office of the Secretary of Defense Sustainment Fellowship Program

The memorandum solicits nominations for the Office of the Secretary of Defense (OSD) 2019-2020 Sustainment Fellowship Program, which will begin in July 2019.  the program is designed to enhance career development of mid-level logistics, sustainment, and civil engineering professionals, military O4/O5 and civilian GS-13/GS-14, who have demonstrated significant potential for advancement and greater responsibility in their career field.  Download Packet