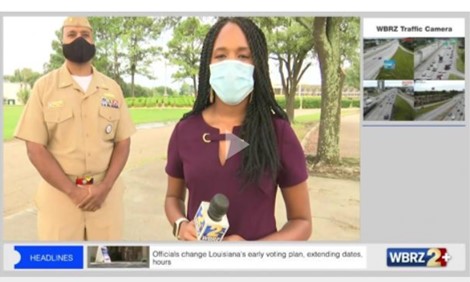 Capt. Roy Love was born and raised in the Dominican Republic and moved to the United States in 1983.  He graduated from Townsend Harris HS in New York City, and then enlisted in the U.S. Navy in 1988, attended the Broadened Opportunity for Officer Selection and Training (BOOST) Program in San Diego California in 1989, and graduated from the State University of New York, Maritime College, where he earned a Bachelor Degree in Marine Transportation.  He received his NAVAL commission in 1993 as a Surface Warfare Officer.

Ashore, he served as Maritime Prepositioned Forces (MPF) Officer for COMNAVBEACHGROUP TWO (1997-2000).  He attended the Naval War College in Newport Rhode Island, where he earned a Master of Arts Degree in National Security and Strategic Studies, and completed his Joint Professional Military Education in 2008.

Following his tour at the Naval War College, he deployed to Iraq during Operation Iraqi Freedom on an Individual Assignment in support of the ARMY 304th Sustainment Brigade stationed at Joint Base Balad as Team Leader of the NAVY’s Petroleum Oil and Lubricant (POL) Detachment (2009).

CAPT Love reported as Commanding Officer of USS BOONE (FFG 28) in June 2010, where he led the ship in winning the Battle Efficiency award in 2011.  He completed his tour on BOONE in December 2011 and assumed Command of Afloat Training Group Mayport in Jacksonville Florida, where he oversaw the basic and intermediate training and certification of all homeported US Navy vessels in the South East.  He reported to OPNAV N96, Surface Warfare Directorate in 2013, and served as Branch Head for Cruiser and Destroyer modernization until April 2014.  Following his tour at OPNAV, CAPT Love served in the Joint Staff, Joint Chiefs of Staff, as Joint Division Chief for PACOM, NORTHCOM, and SOUTHCOM, under the Deputy Director for Regional Operations (J35) from 2014-2016.

In August 2016, he assumed command of Naval Base San Diego (NBSD).  CAPT Love culminated his tour as Commanding Officer of NBSD in July 2019, after leading the base in winning the Commander in Chief Installation Excellence Award.

He is currently serving as Executive Assistant to Commander Navy Installations Command, who leads U.S. Navy shore installation management as the Navy’s shore integrator, designing and developing integrated solutions for sustainment and development of Navy shore infrastructure.  With more than 53,000 military and civilian personnel worldwide across 10 regions, 71 installations, and 123 Naval Operations Support Centers, CNIC is responsible for the operations, maintenance and quality of life programs to support the Navy’s Fleet, Fighter, and Family.