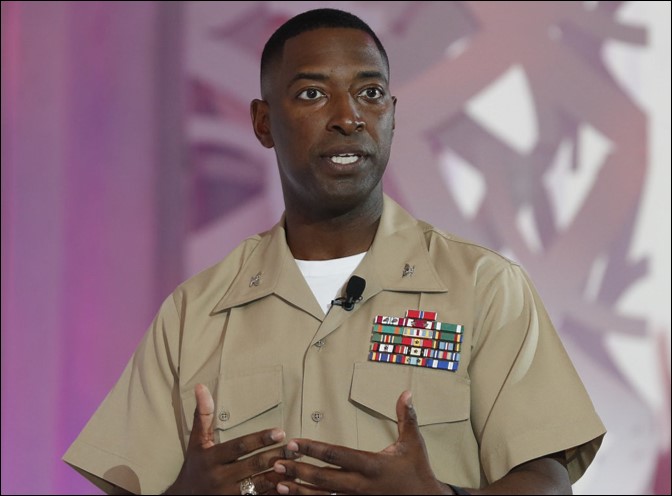 First of all, I am humbled and thrilled to be recognized with this great honor.  I acknowledge that I am the beneficiary of active and engaged leadership, mentorship, and advocacy throughout my career.  I have devoted my life to a career of service and have desired the opportunity to impact the naval services; to that end, I have always kept myself open to learning from those who have come before me.  Especially because of their personal and engaged commitment to me, I count it an obligation as well as an honor to share the lessons that I have learned along these many years.

The following principles describe my leadership philosophy and influence the way that I think.  These principles ultimately affect how I perceive and approach issues as a leader.  Whenever I join a new team (whether in command or a member of a branch/division on a staff), I share that my leadership approach lends towards “challenging” the team to run hard and fast by setting and maintaining a good PACE.

What follows are a few nuggets of wisdom that I have learned along my 26 year journey in the Marine Corps and overall 30 year experience within the naval service.  I freely share these maxims with other mentees, juniors, or anyone who would listen…feel free to do with them what you want.  What follows are principles that I have learned, initiated, and have worked for me during my Marine Corps experience.  More importantly, I implore you to read each of the nuggets as a prompter to your own personal introspection – evaluate who you are today, what immediate impacts you can make in your immediate environment, and who you are striving to become into the future.

Colonel Williamson is an Active Duty Marine, currently assigned as the Military Assistant to the Assistant Commandant of the Marine Corps.  He recently completed an assignment as the Commanding Officer of the Marine Corps Officer Candidates School (OCS) in Quantico, Virginia.  The mission of OCS is to educate and train officer candidates in Marine Corps knowledge and skills in order to evaluate and screen individuals for the leadership, moral, mental, and physical qualities required for commissioning as a Marine Corps officer.  Colonel Williamson was responsible for leading the team that develops the next generation of Marine Corps officer leaders.

Colonel Williamson is originally from Upper Marlboro, Maryland.  Having achieved academic, athletic, and leadership success through his high school and college career, and positively influenced by his family’s military lineage, he decided to serve the nation in the armed forces.  Colonel Williamson attended the U.S. Naval Academy (USNA) in Annapolis, Maryland – USNA is the Department of the Navy’s undergraduate university which focuses its curriculum in Science and Engineering.  Upon graduation in 1994, he earned a Bachelor of Science Degree in Computer Science.

Colonel Williamson was commissioned a Second Lieutenant in the Marine Corps on May 25, 1994.  That same year, he reported to Quantico, Virginia where he attended The Basic School to learn the fundamental leadership and tactical skills necessary to perform as a Marine officer.  Then he attended follow on instruction at the Basic Communication Officer Course to receive specialized training as a Communication and Information Systems Officer.

Colonel Williamson has completed over 26 years of active duty service in the Marine Corps.  During those years, he has performed duties in several different capacities and traveled throughout the world, participating in a myriad of combat operations, contingency missions, and training exercises.  He has completed assignments as a commander and leader of tactical military units and has also served with larger commands as a staff officer responsible for planning and coordinating broader military operations.  As a Communications and Information Systems Officer, Colonel Williamson was responsible for designing and supervising the installation, operation, and defense of radio, telephone, satellite, data communications, and cyber networks in support of Marine and Joint forces.  In his role as a Marine Corps Officer, Colonel Williamson is charged to train and lead Marines to accomplish essential military tasks.

Colonel Williamson currently resides in Arlington, Virginia with his wife and youngest teenage daughter – they also have two adult children.  His personal and professional experiences have motivated him to educate, inspire, and assist others to actualize their true leadership potential.  He has coupled academic knowledge with practical experience to conduct several seminars and presentations on achieving individual and organizational success.  Additionally, as an active member of the community, Colonel Williamson regularly serves as a mentor, counselor, and youth worker with several philanthropic organizations.  His desire is to see every young person meet their fullest potential by passionately pursing a life of purpose.