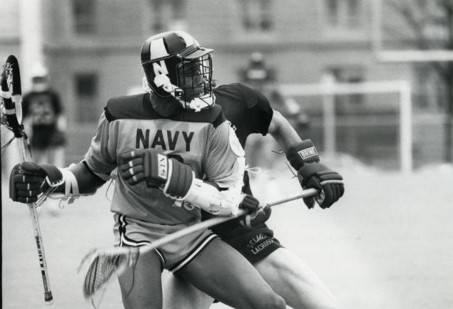 *This article is part of a month long series, Black Lacrosse Stories, that highlights Black players and coaches who have made an impact on our game, but may be lesser known to many younger players today.*

Everybody knows Jim Brown as being the first Black player to earn First Team All-American honors in DI lacrosse in 1957. But who was the second? The answer to that question would be Syd “The Squid” Abernethy who played at Navy from 1978-81 and earned the nickname “The Squid” for his signature head and shoulder fake.

A native of Annapolis, Md. and a product of Annapolis High School, where he played for Johns Hopkins alum Dave Roberts and was a high school All-American, Abernethy chose to stay home and follow his brother, Tom, down the street to the United States Naval Academy. While there, he played for Hall of Fame coach Dick Szlasa and despite following and playing with some of the best attackmen in Navy history, would leave a legacy of his own as one of the best at the position in program history.

During his freshman season in 1978, Navy went 11-3 and fell in the semifinals to Cornell. Abernethy didn’t see much clock and ended the season with just six points (4G/2A). But for the next three seasons he would start at attack for Navy and put numbers that still have him sitting as No. 12 all-time in career points in the history of Navy lacrosse.