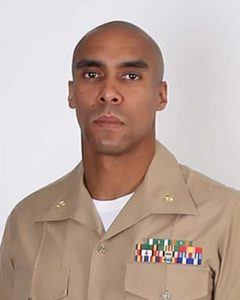 Major Matthew J. Bowman is a native of Washington, D.C. He was commissioned from the United States Naval Academy in 2006 and holds a Bachelor of Science in History with a minor in French. Upon completion of The Basic School and Basic Communications Officer Course, he was designated as a Communications Officer in June 2007, and was assigned to 2d Marine Division.  While at 2d Marine Division he served as a System’s Control Watch Officer for 2d Marine Division (Forward) in Al Anbar, Iraq and as the S-6 for 3d Battalion, 9th Marines deploying overseas during Operation IRAQI FREEDOM and to the Republic of Georgia as the S-6 advisor to the 31st Battalion.

In February 2010, Maj Bowman was assigned to Marine Barracks Washington and served as a program manager and Deputy Director for Distance Learning and Technology at the Marine Corps Institute. Additionally, he served as a ceremonial host at Evening and Sunset Parades and as a White House Social Aide for President Obama.

In July 2011, Maj Bowman began work at the Marine Corps Network Operations Center (MCNOSC), serving as a watch officer and as the Future Operations Officer.

In November 2013, Maj Bowman deployed to Afghanistan as the G-6 advisor to the 215th Corps Afghan National Army in Helmand Province during Operation ENDURING FREEDOM.

In July 2014, Maj Bowman reported to 9th Communications Battalion and served as the Commanding Officer Company B and as the Officer in Charge of the I Marine Expeditionary Force Deputy Commanding General’s Jump Combat Operations Center.

In April 2016, Maj Bowman reported to the 15th Marine Expeditionary Unit as the S-6 and deployed during WESTPAC 17.1.

In July 2018, Maj Bowman reported to the Naval Post Graduate School, Monterey CA and graduated in 2020 with a Master of Science Information Warfare Systems Engineering degree and a graduate certificate in Space Operations.

Maj Bowman is married to the former Alicia Downey of Fort Worth, TX, and they have one daughter.